A New Way to Roll 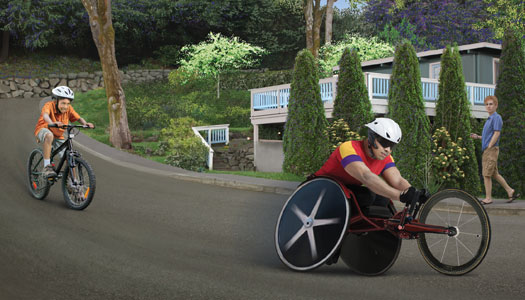 “He shoots, he scores!” Zack threw his hands in the air as the ball swished through the net.

“Seriously?” Oliver gasped for breath. “You’ve gotta join the team when school starts. I used to be the champ until you came along.”

“I played a lot of basketball before we moved here,” Zack replied. “I guess the game’s the same wherever you go.”

He took another shot. Swish.

“You win,” Oliver said, flopping to the ground. After a few deep breaths, he sat up. “Hey, some of the guys are going camping this weekend. Our dads are taking us up the trail to the old mineshaft. You and your dad should come.”

“Yeah, probably not,” Zack mumbled, looking down. His excitement completely disappeared as he kicked a pebble with his toe.

“It’s gonna be awesome!” Oliver said. “The hike isn’t super long, but it feels like you’re in the middle of nowhere. The stars are so bright you can see the whole Milky Way. C’mon, just do it.”

“I said I can’t!” Zack yelled, throwing the ball across the court.

“Sorry,” Zack mumbled. “I’ve gotta go.” He hopped on his bike and rode away without another word.

It’s Not Fair
Zack pedaled hard. His eyes stung with tears, but he just kept riding.

Life is so unfair! he thought. How am I supposed to tell people my dad can’t walk?

Dropping his bike on the front lawn, Zack ran inside. He slammed the door behind him.

“Gently, please,” his mom said. “Let’s keep this house new as long as we can.”

Zack didn’t reply as he stomped down the hall to his room. He flopped onto his bed and picked up a comic book. All he could think about were his new friends, laughing and hanging out without him on the camping trip.

His dad used to do everything. Things had changed so quickly.

Zack glanced up when he heard a quiet knock on his door. He didn’t answer.

His dad opened the door, then pushed his wheelchair beside Zack’s bed. “Your mom’s worried about you.”

“I’m fine,” Zack replied. He pretended to read his comic.

“I know the move was tough,” his dad said. “We’ve had a lot of changes, but this is the perfect place for me to train for the paracycling world championships.”

“It’s not the move,” Zack said. “We moved all the time when you were in the Army.”

“I’m still in the Army, Zack. You don’t stop being a soldier just because of an injury.”

“I mean when you could walk!” Zack put his hand over his mouth. He couldn’t believe he’d said that out loud.

Zack’s dad took a deep breath. He pulled Zack into a tight hug. “You’re right, son. Life is not fair.”

“I just hate that you can’t do normal stuff anymore,” Zack said. He could feel the tears swelling in his eyes. “I’m starting to make friends here, but they don’t know about you—I mean, about your injury. They invited me to go on this father-son backpacking trip. What am I supposed to say?”

“Say yes,” his dad said. “I don’t want your life to change more than it has to.”

Zack shook his head. “I’m not going without you. All the other dads will be there.”

His dad sat up straight. He looked at Zack, then smiled. “Let’s go for a bike ride.”

His dad rolled to the door. “That is, if you think you can keep up.”

Head Held High
Zack and his dad cruised down the street. One on a regular bike and one on what looked like a high-tech tricycle mixed with a race car. With two aerodynamic wheels in back and one in front, Zack’s dad stretched forward over the bike. He pedaled with his arms, churning the cranks and chain that were mounted above the front wheel.

Zack could only watch in admiration as his dad raced up the steep hill. With every push, his broad shoulders, thick chest and chiseled arms bulged and rippled. He was a rocket on his handbike.

“No fair,” Zack said between gasps. “Your bike is custom-built for racing.”

“That’s true.” His dad laughed. “But when I ride, I feel like God made me just for this. So I guess I’m custom-built, too.”

Sweat ran down the side of Zack’s face from under his helmet. He stood up to crank on the pedals. His dad was taking it easy on him— he’d already done his training ride for the day.

This was just for fun.

With everything that had changed, it felt good to focus on the things that hadn’t changed: family, faith and bike races.

Zack almost didn’t see Oliver standing by the road until he’d passed him.

“Zack?” Oliver said, a confused look on his face.

Oh, no! Zack thought. He slowed down, letting his dad pull far ahead. Maybe Oliver wouldn’t figure it out.

“You OK, buddy?” Zack’s dad called, circling back to him.

Zack couldn’t hide his dad from his friends any longer. And suddenly, he realized he didn’t want to.

My dad’s a hero, Zack thought. I should be proud of him, even if he’s different from other kids’ dads.

“Hey, Oliver,” he shouted back to his friend. “Can’t talk now. I’ve gotta catch my dad.”

King of the Court
When Zack got to the basketball court the next day, he saw the other boys whispering to each other.

Oliver must have told them.

Whatever, Zack thought. He grabbed the basketball and sank an effortless three-pointer. “Who wants to play?” he asked.

With every shot, Zack felt his confidence grow. He could be more than the kid whose dad couldn’t walk. Zack was king of the court, and if any of the guys had a problem with that, they’d have to beat him one-on-one.

After the game, Oliver pulled him aside. “Hey, are you sure you don’t want to go camping?”

Zack didn’t flinch. “Sorry, but I’m not going without my dad.”

“Oh, right.” Oliver dribbled the ball quietly, then asked, “Um, what happened to him?”

“He was on patrol one night when his unit came under fire.”

“So that’s why he rides that cool bike?”

Zack smiled. “Yeah, he’s actually one of the best paracyclists in the country. He races all over and counsels other wounded veterans.”

Oliver shot an easy layup, and passed Zack the ball. “Sorry I kept bugging you about the hike. I didn’t mean to hurt your feelings.”

“It’s not your fault,” Zack said. “I never said anything. I guess I thought it was easier not to talk about it.”

He passed back to Oliver. “Hey, why don’t you come over for dinner tonight?”

“Are you sure?” Oliver said.

“Totally.” Zack smiled. “We’re just like any other family—only faster on two wheels.”

Hit the Trail
“Rise and shine, sleepyhead!” Zack’s dad called, thwomping him with a pillow.

“Not if you’re going to finish your hike by lunchtime.”

His dad laughed and handed him a stuffed backpack. “Everything you need is in here. Your friends are waiting for you.”

“No buts,” Dad said. “We’ve got everything worked out.”

Zack pulled on his clothes and stumbled outside. Oliver and a few of the other guys sat on the lawn. They all wore hiking boots and baseball caps. A group of dads stood by the car, arguing over a map.

Oliver stood up. “We really wanted to find a way for you and your dad to come on the camping trip. So my dad talked to one of the park rangers. There’s an old Jeep trail that leads right up to the mineshaft. It’s closed now, but the ranger gave us permission to drive it.”

Zack’s dad wheeled up behind him. “You go ahead and hike. I’ll meet you at the campsite, and we’ll have a roaring fire ready by the time you arrive.”

“What are we waiting for?” Oliver’s dad said, opening the back hatch on his Jeep. “Let’s get your gear loaded and hit the road.”

“Just a second,” Zack interrupted. He stepped back and held his dad’s hand. “Everyone, I want you to meet my dad. He’s in the Army.”

One by one, the boys stepped up to shake hands with Zack’s dad. A few of the other dads saluted.

Zack quickly wiped a tear from his eye, but he’d never admit it. He bent down and gave his father a big hug. “Love you, Dad.”

“Love you, too, buddy,” his dad said, squeezing Zack tight. His arms were stronger than ever.

Zack grabbed his backpack and sprinted down the driveway past Oliver. “Let’s go!” 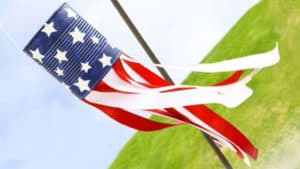 Take a bite of history with these old-fashioned cookies. 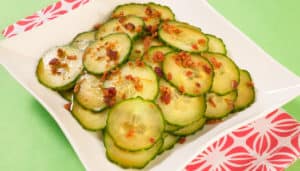 Crunch into this salty, sour snack!

Every month, Focus on the Family Clubhouse magazine features fun crafts and recipes for children ages 8-12. More than 80,000 families use the Christ-centered stories, quizzes and puzzles to help their kids learn about and grow closer to Jesus.
Subscribe